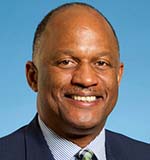 Scott A. Simmons, JP, MP is an elected member of the House of Assembly representing Constituency 32 – Southampton West. He is also the Government Whip and serves on the Parliamentary Select, Oversight and Standing Committees. He is Chairman of the Bermuda Board of Immigration.

Previously, Mr. Simmons served on the Boards of Tourism, Works and Engineering, Marine and Ports, Bermuda National Parks Commission and as a Director of the Bermuda Land Development Company and the West End Development Corporation.

His primary and secondary education was in Bermuda after which, Mr. Simmons furthered his education in the United States and Canada. His professional career began with the Bermuda Police Service, where he served as a police cadet and a police constable.

Mr. Simmons expanded his career with the Bank of Bermuda in Corporate Banking, Corporate Trust and Global Custody. He later moved into the hospitality industry at Princess International's Group of Hotels in Bermuda serving as Night Manager, Assistant Manager Residential, Director of Security and Assistant Manager Food and Beverage, respectively. His experience in smaller hotels included professional managerial development at Cambridge Beaches and the Coral Beach Club.